BRCA1, a protein that is well-known for its role in hereditary breast cancer, is an important part of the cellular system that repairs double-strand DNA breaks. Now, researchers from Japan have discovered a new way in which cells protect these broken DNA ends to make sure that they are repaired correctly.

In a study published in Cell Reports, researchers from Osaka University have revealed that protein phosphatase 1 (PP1) binds to double-strand breaks early on to promote repair by a process known as nonhomologous end joining instead of by homologous recombination.

The decision on which of these two pathways is used to repair double-strand breaks is carefully regulated by the cell in a number of different ways. One method involves a protein called RIF1 binding to broken DNA ends, where it prevents other proteins from further degrading the break site to repair by homologous recombination.

“Double-strand breaks that are not protected by the RIF1 protein complex are susceptible to digestion by other proteins, which creates a section of single-stranded DNA for repair by homologous recombination,” explains lead author of the study Shin-Ya Isobe. “A protein called Shieldin can bind to this single-stranded DNA tail through RIF1 to prevent further digestion, but we suspected that other factors may also play a role in this process.”

To identify other factors that could help protect newly broken DNA ends, the researchers used a technique called proteomic mass spectrometry to find out which proteins interact with RIF1.

“We found that PP1 binds specifically to RIF1 at the broken DNA ends, and that the physical interaction between these two proteins is necessary to block proteins that create single-stranded DNA from binding at double-strand break sites,” explains Chikashi Obuse, senior author.

Importantly, the interaction between PP1 and RIF1 helps keep double-strand DNA breaks from developing a single-stranded “tail,” which is what Shieldin binds to. This means that PP1 acts earlier in the process than Shieldin to help push the cell toward the non-homologous end joining repair pathway.

“Our findings reveal a novel mechanism for selecting a double-strand DNA break repair pathway that acts early on in the repair process,” says Isobe.

Given that problems with double-strand break repair are a crucial feature of many cancers, understanding more about how the cell decides which pathway to use to fix these damaged sites could provide important insight into cancer development. The results from this study could therefore help develop new options for treating hereditary breast and ovarian cancer in the future. 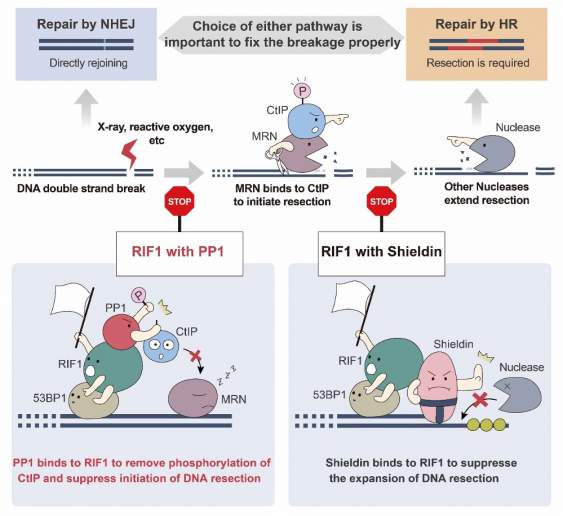 Fig. Protein Phosphatase 1 acts as a RIF1 effector to suppress DSB resection prior to Shieldin action

The article, “Protein Phosphatase 1 acts as a RIF1 effector to suppress DSB resection prior to Shieldin action,” was published in Cell Reports at DOI: https://doi.org/10.1016/j.celrep.2021.109383