The main constituents of cells, tissue, organs, and whole organisms are proteins, which are built by the addition of amino acids one after another to form long protein chains called polypeptides. Although living cells have advanced machinery that can achieve this chain extension with astonishing speed and accuracy, efforts to mimic this reaction in the lab in order to create natural peptide products or peptide drugs have remained crude and laborious by comparison.

Using variants of amino acids called amino thioacids, a team at Osaka University has overcome these difficulties to achieve the accurate and simple extension of peptide chains in a rapid reaction. Their work, published in the journal Biochemistry, also suggests that, billions of years ago, this particular chemical mechanism could have enabled an abundance of larger more complex molecules to appear, potentially providing the conditions out of which life eventually arose.

In this study, the team focused on improving previous efforts to artificially synthesize polypeptides, in which a major obstacle was the need to include protective groups. Such protective groups are added to functional groups within a molecule to ensure that a subsequent reaction is specific. However, they require multiple reaction stages to be performed, which makes the procedure inefficient.

“In our efforts to improve artificial peptide bond formation, rather than focusing on amino acids, we looked instead at amino thioacids, which include a sulfur atom,” Yasuhiro Kajihara says. “We started with the amino thioacid version of phenylalanine as a monomer, and under a reaction lasting just five minutes found that peptide chains containing two to five phenylalanines formed. An alternative analysis revealed chains as long as 12 phenylalanines.”

The team then showed that the peptide chain extension occurred with mixtures of amino thioacids and also only under acidic conditions, which suggested that oxidation was key to the mechanism involved. The team confirmed this by characterizing the reaction, and also showed that it involved a unique reaction intermediate, which ensured that the intended product was accurately generated.

“Given that the extension of regular amino acids into chains is a key factor for life, we wondered whether, billions of years ago, amino thioacids could have acted as a precursor to the more complex chemistry that led to the development of sentient life, in view of their rapid and simple incorporation into chains,” lead author Ryo Okamoto says. “We found that the oligomerization reaction also proceeded under chemical conditions resembling those on Earth before life arose, using reaction components such as iron ore and sulfuric acid, which could have been generated from volcanic gas.”

The team’s work thus provides not only an efficient laboratory tool for a range of practical applications, but also a potential glimpse into the chemistry from which life began. 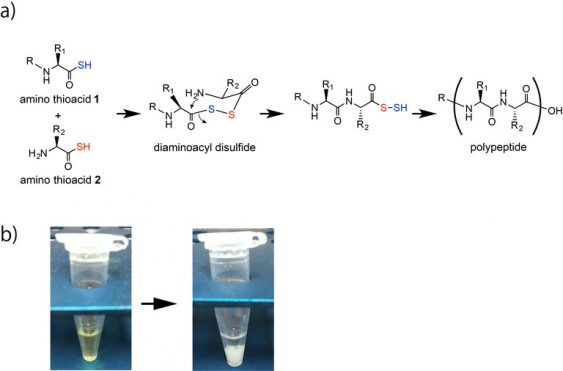 The article “Regioselective α-Peptide Bond Formation Through the Oxidation of Amino Thioacids” is published in Biochemistry at doi: https://doi.org/10.1021/acs.biochem.8b01239.